I'd like to think that we got pretty lucky to score ourselves a slot at Sat Bains' 'one night only' dinner at Seiobo. Afterall, I was sharing a room dining with some of the who's who of the Sydney culinary scene. I love it when renowned chefs come to visit and cook at host restaurants in our city as it's always a good way to have an idea of their cuisine without having to buy a ticket halfway across the world. Plus, it's also great to see how their food sort of fits in with what we already have here. Most of the time though, such experiences can go either bad or great and rarely in between. I went to one visiting chef's dinner in Singapore before and it was disastrous when his team tried to use mangosteen in their dessert just because they wanted to incorporate local flavours. And there were the great ones like Ben Shewry whose food I was impressed with when he visited Singapore for the World Gourmet Summit one year and Magnus Nilsson who cooked at Marque during the Sydney Good Food Month. But I digress. Armed with the head chef, John Freeman, from Restaurant Sat Bains in Nottingham in tow, Sat Bains' collaborative dinner with the guys at Seiobo was a culinary experience that was truly mouthwatering. 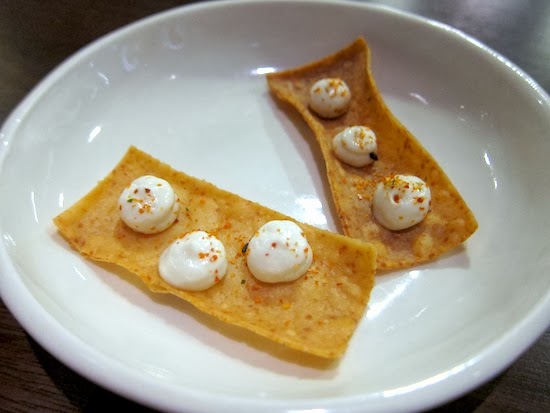 A little about Sat Bains. Owner of the 2 Michelin Star Restaurant Sat Bains, Sat Bains won the Roux Scholarship, beating out Gordon Ramsay in 1999. He had worked under Raymond Blanc and trained alongside Noma's Rene Redzepi. Restaurant Sat Bains received a Michelin Star in 2003 and became the first restaurant in Nottingham to earn the Michelin honours. Interestingly, Ben Greeno who is chef de cuisine at Seiobo, worked under Sat Bains on and off for about 9 years and considers Bains as his mentor.

We started in typical Seiobo fashion with a little canapé of fried chicken batter and smoked roe. It was crispy, moreish and I could have managed quite a few more. The chicken flavour really came through and the smoked roe reminded me of mentaiko which I liked very much. 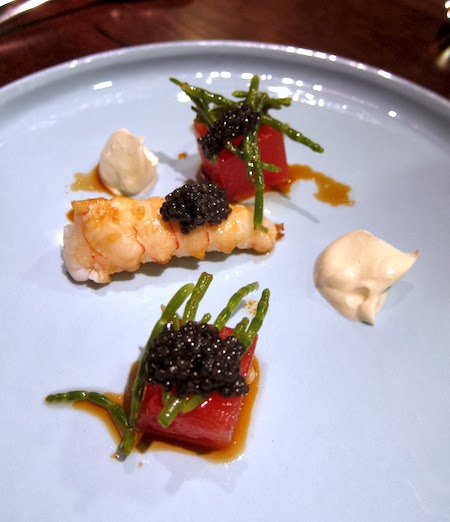 The first proper course was Chef Bains' dish which really helped to set the tone for the rest of the dinner. It was my first time eating samphire which is a succulent that grows along coastal areas. I've seen it used so often on British TV shows but never had a chance to try it. I thought the whole dish came together really well - perfectly cooked scampi paired with the sweetness from the compressed watermelon, the brininess of the caviar, the slight sourness from the buttermilk and the crunch from the samphire. This was a delicious and refreshing start.

The second dish was a familiar one from Seiobo's repetoire of dishes. I've had this dish on a previous visit although the protein at the time was not octopus. The eel dashi and almond milk were savoury but I found the octupus to lack a distinct flavour up against the dashi. 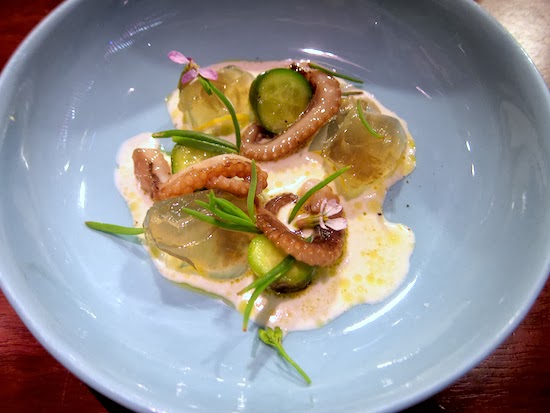 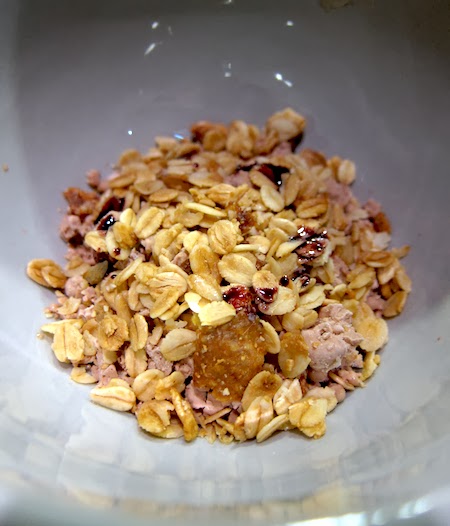 The next dish was one that is served at the Nottingham restaurant - the Chicken Liver 'Muesli'. This was my favourite dish of the night. Chicken liver parfait that has been freezed in liquid nitrogen, crumbed and mixed with oats (and other goody breakfast grains) and beans, sat on top of hidden surprises of a berry and apricot puree. Every mouthful was a delight and just digging right down the bottom of the bowl was such a treat as each spoonful brought a different mix of flavours. A winning dish it was and possibly one of the best things I ate all year.

The salmon was another one of Chef Bain's dishes. I actually liked the umami flavour of the mussel soup but unfortunately, it was slightly overseasoned. I'm usually not averse to salt so I did not have much of a problem polishing everything from the bowl but I could imagine that some other guests might have found it slightly too salty. It did however, go pretty well with the confit salmon. 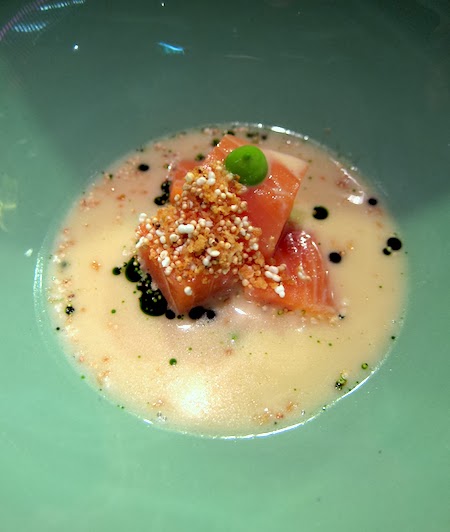 The next dish from the Seiobo team was another excellent one and probably stands alongside the scampi dish for 2nd most favourite dish(es) of the night. The marron which was brought in from Western Australia was plump, sweet and so juicy. Cooking it to perfection meant that the marron was tender and not at all chewy. I loved the pickled mushroom sauce and the earthiness of the cauliflower. 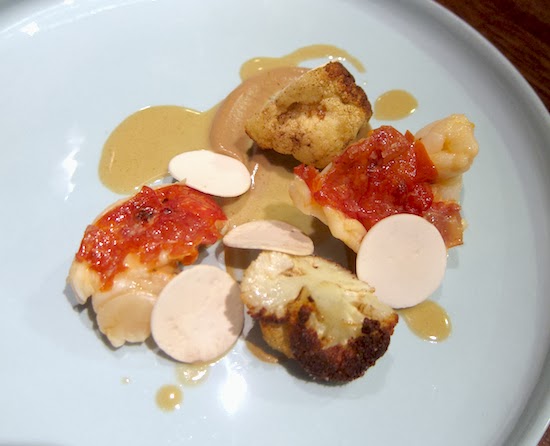 The final savoury course was one of Chef Bains. Whilst R found the lamb to be slightly too fatty for his liking, I had no problem with all that good fatty bits as it added a tremendous amount of flavour to the meat. The components on the plate really helped to cut the richness of the meat as well. In particular, I liked the acidity from the pickled onions, the freshness of the raw turnips and the goat's cheese. The lamb jus was slighty gelatinous and incredibly tasty - I wished I could slurp up every morsel of that liquid! And who can resist a nicely caramelised potato gratin?! 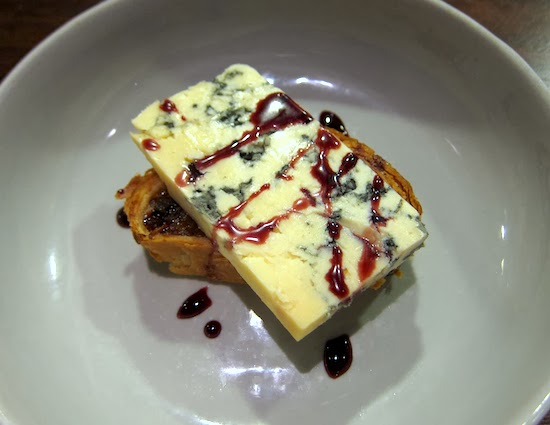 As soon as we had the cheese course placed in front of us, R and I let out murmurs of 'oooohhhsss' and 'aaaahhhhsss'. Without even tasting it, R declared it his favourite course of the night! As you can tell, he's a huge cheese lover but what made it even better was the Banbury Cake that came with the Stilton. A Banbury Cake resembles an Eccles Cake and is filled with lots of spiced currants - it was the perfect accompaniment for the Colston Bassett Stilton which was brought in from Nottinghamshire. It was excellent and while many might not take to blue cheeses well, I was a huge fan before and an even bigger one now after having that amazing Stilton.

The first of the 2 desserts we had was from Seiobo's team - Sorrel Ice Cream with Pistachio Cream and Muntries. I liked this quite a lot although it was really simple. I've always loved the flavour of sorrel and to be honest, it kind of reminds me of mangosteens everytime I have it. Anyhow, I've had sorrel sorbets a few times but having it incorporated into an ice cream was a first. The pistachio flavour came through pretty distinctly which came a little as a surprise but a pleasant one. 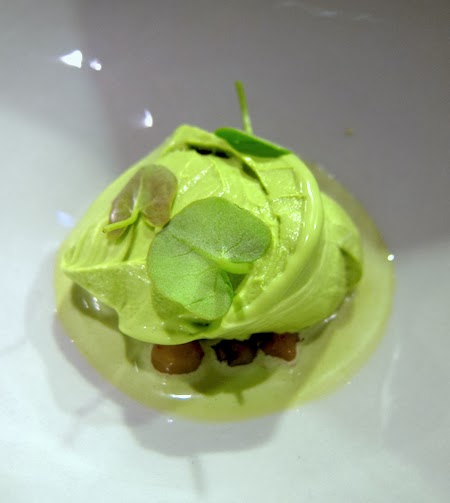 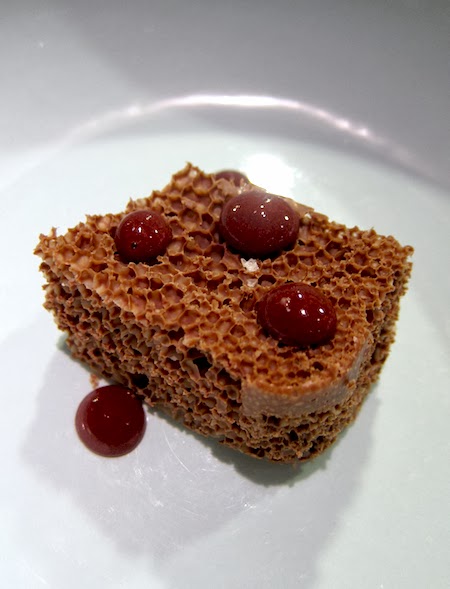 The second dessert was an intriguing one from the visiting chef who also serves this at his Nottingham restaurant. It was introduced to us as an aerated chocolate cake. It certainly looked the part as one could see the air pockets which looked like honeycomb. However, in the mouth, it simply had the same texture as a regular chocolate bar. I was then explained to by the chef that it was a complex process which I'm not going to divulge here just to keep the suspense. Let's just say that "air" was introduced then taken out again somewhere along the way. The classic combination of cherry and chocolate working well was an understatement.

We finally ended the meal with 2 petit fours - the Salted Caramel with Konbu from the Seiobo kitchen and traditional Canelés from Sat Bains. 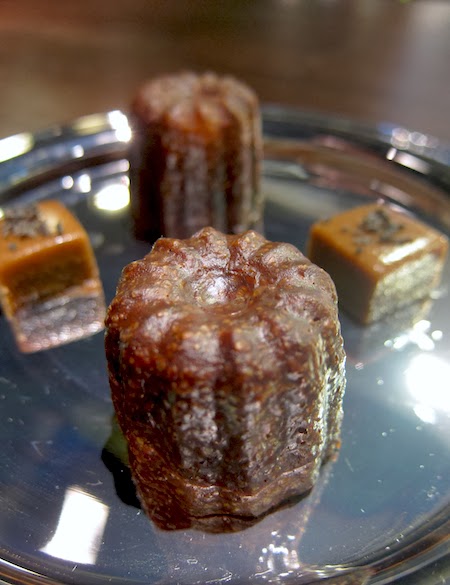 I loved this meal and I liked that someone came around to shake things up in the kitchen. Things like these usually help open our eyes (and tastebuds) to the ideas and foods that are served in other parts of the world. I know I did start off in this post saying that events like this should save me from travelling but there is a problem that I failed to mention. It looks like I might want to visit Nottingham someday. And more specifically, Restaurant Sat Bains.
posted by sooks at 2:00 PM
Email ThisBlogThis!Share to TwitterShare to FacebookShare to Pinterest