OK. Not quite birthday at the beach. After a long break from themed parties, YA and I decided to put a theme to our bday celebrations this year just to spice things up a little. It was quite hectic cos everything was only put together a week before the party and there seemed like a whole load of stuff to organise, people to contact, food to cook and so on.
Luckily, everything worked out well in the end. I managed to borrow some props from colleagues and friend's colleagues; hammocks, kids' beach toys and even a baby pool! D also had ideas to go all out and bought balloons and more decorations. It turned out looking like a party for 5 year olds actually. Of course YA and I are far from being 5 but it's probably the 'getting older' thing. You want to get younger as you grow older (I know I'm not just speaking for ourselves here). Playing dress up was pretty easy for everyone. I even managed to wear something that was stuck deep in my wardrobe for a long time (Thank God!). 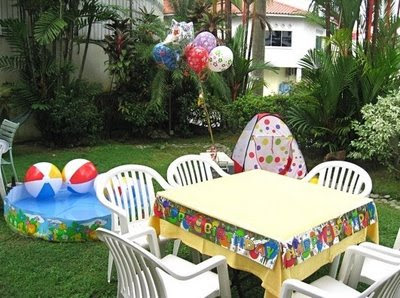 I think YA & D did really well with the set up here. You think?
It was pretty easy to prepare the food this time considering that there weren't any major recipes to stick by except for the dessert. Started with some raw carrot and celery sticks served with a store-bought roasted capsicum dip, biscuits, salami and garlic cheese. 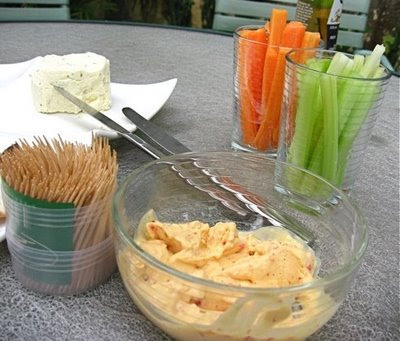 That was subsequently followed by roasted garlic potato wedges with a lemon, rosemary & salt seasoning. First tried this Jamie Oliver recipe last year with Wen at Liz's place and it really tasted great so I thought it would make a nice snack for the guests. 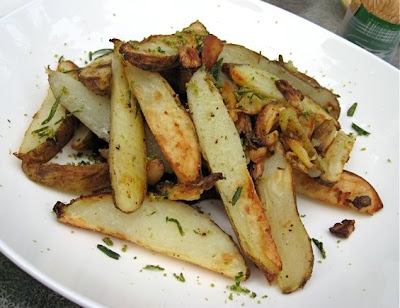 Things warmed up pretty well by the time the pepperoni pizza hit the table. Thanks to Uncle Wee for his nice tomato base, I managed to create a nice thin crust pizza. Conversations were flowing, food was making its way out of the kitchen and friends were getting quite a bit of bubbly. There was of course the typical beach beer; Corona with lime. I also made a lemon & basil soda ala PS Cafe. Really didn't take much time and cost much money since I had so much basil growing at home. 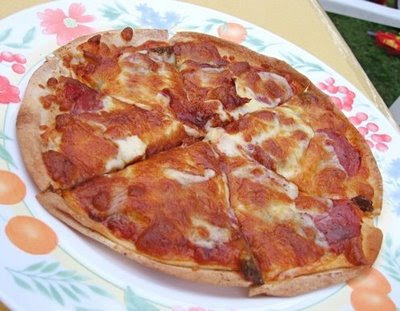 It was honestly a little tedious putting the star of the night, the burger, together since there were so many ingredients to take care of. The beef patties, bacon and sunny-side ups had to be pan-fried, onion rings to be deep-fried, lettuce and tomatoes to slice. It was fun though cos I arranged it in such a way that people could put their own burger together, just the way they liked it. It was really delicious if I must say so myself. The spicy mayonnaise which was the burger sauce and the runny egg yolk in the case of my burger really made things messy but tasted so good with the rest of the ingredients. 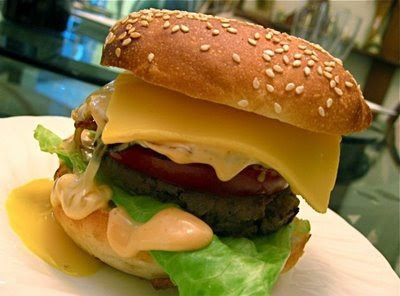 I made a fruit cobbler for dessert that night. Was really easy to make and turned out pretty well although I thought it was going to be a failure at the beginning. It was served with vanilla ice cream which really contrasted well with the sourness of the cooked fruits but I guess most were too full from the food and the cakes to finish up the cobbler. 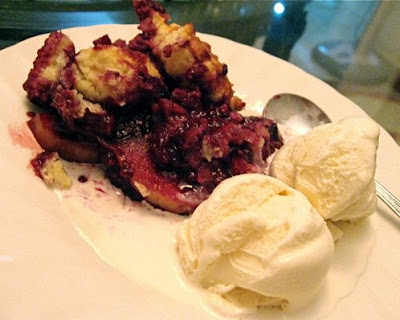 This is the second time I've put together a bday cookout thing. I remember it was just a year back when I cooked for a party of 8. That was the first time I've ever cooked for more than 4. Of course I took baby steps. First it was 3, then 4, then 8 and this time 12. It was tough running in the out the kitchen whilst trying to interact with my friends but it was really worth it.
Many ask me why I work so hard when it should be me getting the day off cos of my bday. It is hard work I don't deny but the satisfaction and experience I gain far outweighs the effort that is put in. The only thing I have to complain about is that I miss out on quite a number of conversations with friends since I'm not always around. I guess it works out that there's always YA celebrating his bday with me. I take care of the food; he takes care of the crowd, something he's always been good at.
I would say that the party was a success. Mum did a great deal of helping out too otherwise my friends would have had supper and not dinner. Thanks also to my friends for their presence, the nice surprise gift and the cake from my favourite patisserie. 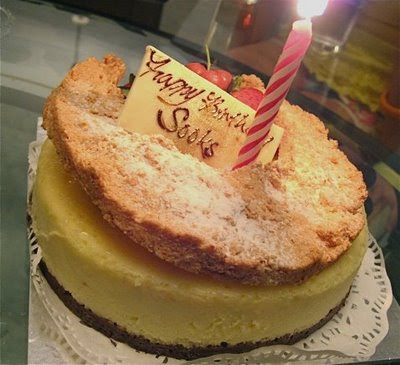 It's exciting just thinking about a new idea for next year. It might be too early but still... 'til then!
p/s: I must make special mention that if not for it, there may not have been fine weather and the party would have gone down to the dogs. So I'm paying tribute to it here and I'm saying it now and will say it for as long as it works. I BELIEVE! 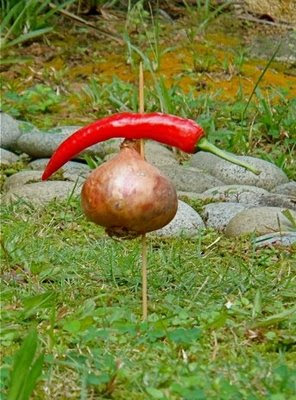 posted by sooks at 2:18 AM
Email ThisBlogThis!Share to TwitterShare to FacebookShare to Pinterest