the new kid on the block - momofuku seiōbo 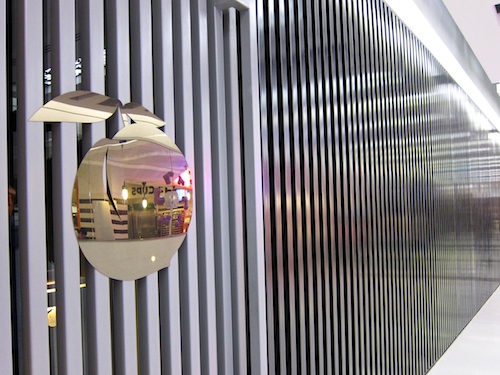 It's hard to even describe the kind of excitement that was building up since last year when it was announced that New York famed chef, David Chang of Momofuku was going to be part of Star City's (now known as The Star) multi-million dollar redevelopment. A buzz was quickly created. The food scene is strong in Sydney and for years we've been seeing exports like Tetsuya Wakuda and Luke Mangan setting up Waku Ghin and Salt respectively in Singapore. However, to have one of Time's 100 Most Influential People of 2010, a James Beard award winning chef who has Michelin Stars on his back set up shop here, it's no wonder people have been looking forward to what David Chang was going to bring to Australia.


One of those people was R. I've heard him rave about Momofuku's signature pork buns umpteen times before and he could hardly contain his excitement when he knew that Seiōbo's opening date was drawing near. Needless to say, when we knew that reservations were open, he got in there quick and scored us a table for opening night! 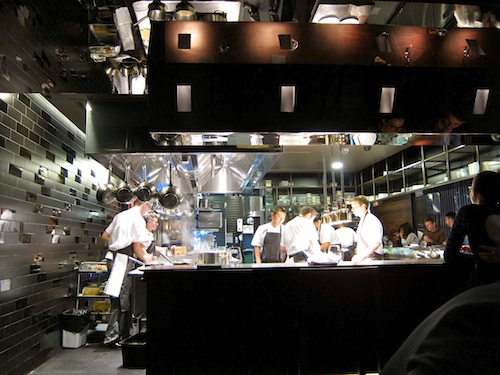 Besides the excitement of being at David Chang's new restaurant on the day the doors were officially opened, the silver lining was to actually see Chang himeslf, doing what he does best in the kitchen and to have him introduce his dish at our table. The concept here in Sydney pretty much follows NYC's 2 Michelin Star Momofuku Ko where the meal is a prix fixe 15 course dinner priced at AUD175 and most of the ingredients are sourced locally in Australia. Although I've never been to his restaurants in NYC, I'm sure they're excellent because I was really impressed and blown away by many of the dishes which I had at Seiōbo. 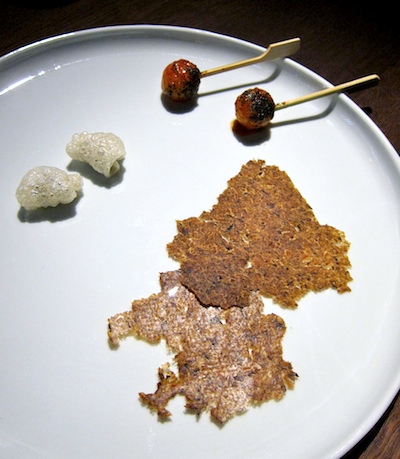 The dinner kicked off with one of the chefs (from Ko) bringing some canapes over to our table. My favourite was the shiitake chip as it was packed full of the mushroom flavour. The mochi coated with Korean gochujang was excellent too. The rice ball had a nice crisp and a good chewy consistency. The chilli also had some spice but yet wasn't too overpowering. 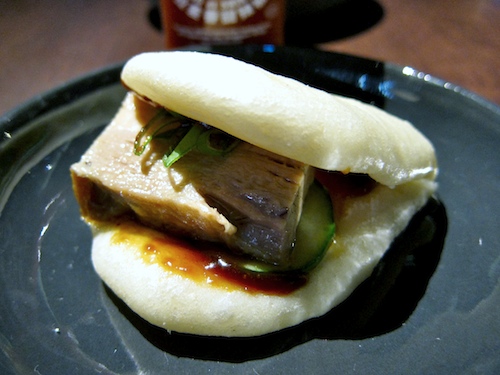 This dish probably needs no introduction if you're familiar with what David Chang's Momofuku is known for. When some people found out that Seiōbo wasn't following the casual route with the likes of Ssäm Bar & Noodle Bar, they were also disappointed at the thought that they were going to miss out on these pork buns. While it's not a dish that you can just walk in to order, I'm really thankful that it made the menu here. The bun, baked inhouse, was really soft and the all important accompaniment for the tasty and tender pork belly, hoisin sauce and pickled cucumbers. R said that it was as good as what he had at Noodle Bar years back and so for that, I declare this dish a WINNER! 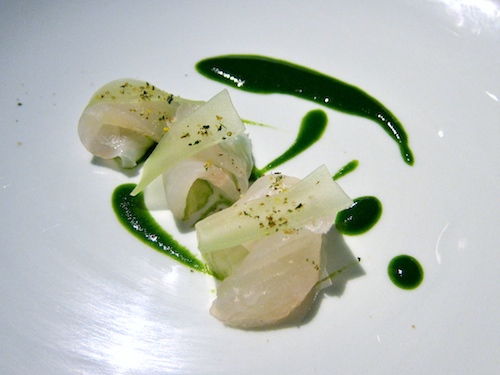 Among all the dishes of the night, I would think that this was the dish which my table was least impressed with. I liked the choice of fish as I liked that the flesh was meaty and clean on the palate. What was less impressive was probably the use of warrigal greens as its spinach-like flavours were pretty flat and didn't serve as much of a contrast with the fish. The best way for me to put it is that the flavours just didn't 'pop' here like his other dishes of the night. I did however, still appreciate the clean flavours of the dish, the freshness and sweetness of the fish and the little sprinkle of furikake on the top which gave the dish some salt. 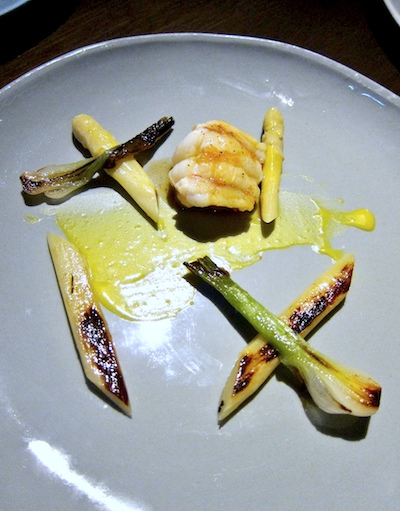 The whole dinner pretty much went upwards from this dish on. The marron from Western Australia was sweet and cooked perfectly. The asparagus which was marinated with miso was flavourful and savoury. All the elements paired together with the lemon puree which had a touch of acidity worked extremely well. A really successful dish overall. 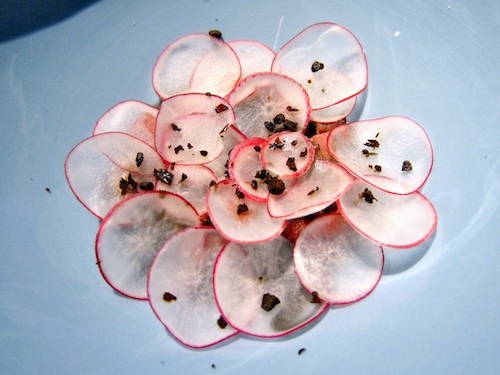 David Chang introduced this at our table and explained that the beef jowl was used in this dish. Besides the little beef cubes, radish and black beans, there was also watermelon rind in the dish which was brought together with a sherry vinaigrette. This dish was a surprise because I'd never had fermented black bean which is used so often in Chinese cooking during a meal at a fine dining establishment. In fact, this was the element that I felt really made the dish because it brought a different type of savoury to the dish as compared to just using salt. The raw radish kept the dish light and gave some crunch. I slurped up every bit of the sherry vinaigrette because it was utterly delicious. I could definitely have eaten another portion of this. 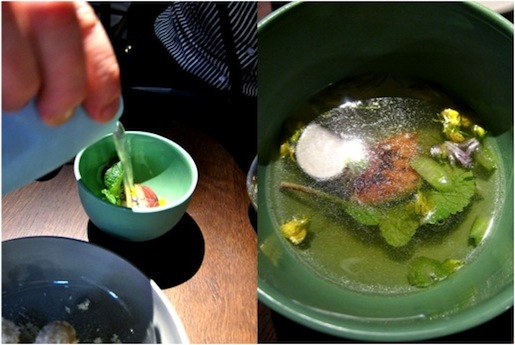 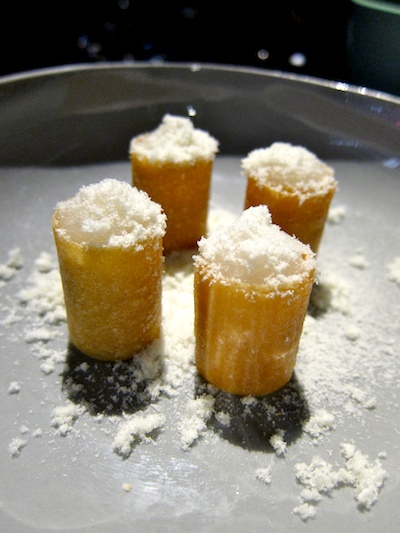 If you've ever had the chance to flip through David Chang's Momofuku cookbook, you'd see different recipes for dashis. The dashi here was light yet extremely flavourful. The smoked eel added the slight smokiness to the dish which complemented the dashi. The eel brandade was a hit with the table. The first flavour that hit the tongue was the sweetness of the apple and then the flavours of the eel came through right after. The wafers used to contain the brandade was light, crispy and super thin. This little snack was a real delight. 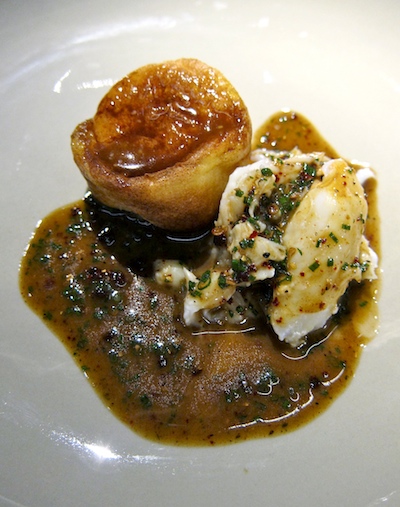 Another excellent dish which I could have easily eaten another of. The crab yorkshire pudding was perfect for mopping up the Old Bay sauce off the plate. The sauce had a good amount of spice in it which lingered on in the mouth even after the plate was cleared. 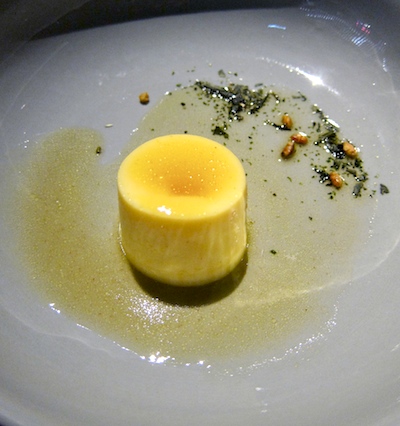 This was a simple dish yet one that was probably one of the most technically difficult to execute. The egg custard was extremely smooth and still slightly wobbly in the centre. The toasted rice added a nice crunch and smokiness. The chicken stock with butter that was the sauce for the dish was delicious and if I had to criticise, I would have wished for more sauce! 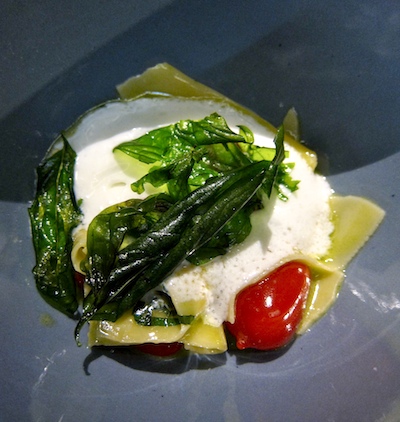 Easily one of my favourite dishes of the night. The dish seemed simple in concept but yet it packed a whole lot of flavour in one little bowl. The pasta wasn't overcooked and the goat's cheese unlike many that I've tried, didn't have a strong and overpowering taste. The sweet tomatoes, a hint of chilli and mint really helped lift flavours and completed the dish. One of the best pasta dishes I've had in a while. 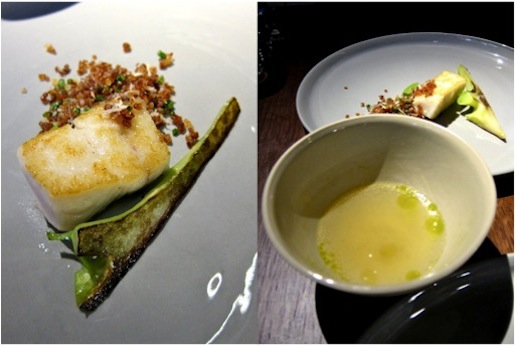 In a bid to reduce any wastage, the trumpeter was broken down and served 3 ways. The first was raw which formed the 3rd course above. This course featured a pan seared trumpeter and a trumpeter and fennel soup. The fish was delicately cooked and paired well with the broccoli puree it was sitting on. The crispy bits of potato added the crispy texture and was extremely moreish. The fennel really came through as we got a whiff of it the moment the soup was placed on the table. It was a nice and clean finish for this course. 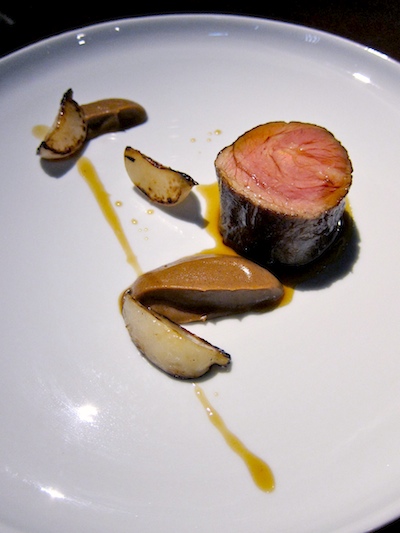 Another excellent dish which rounded up all the savoury dishes before we proceeded onto cheese and desserts. The lamb neck had a good amount of fat, was extremely tender, flavourful and cooked to perfection. David Chang seems to have thing for pickling vegetables (as shown in his cookbook) and again, we see them done here with the turnips. I liked the tartness that the pickling brought to the dish as it helped to cut through the fat of the meat. I think it made the perfect accompaniment for the lamb and the roasted daikon puree when eaten all together. 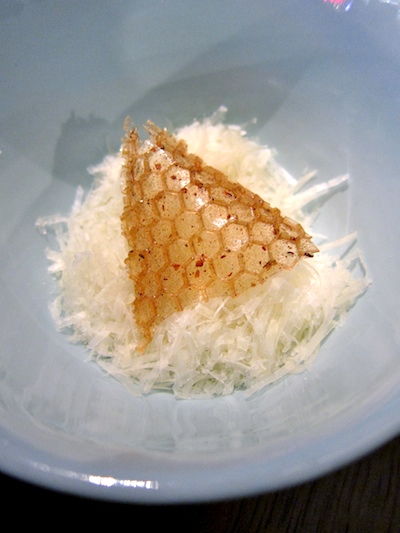 Pecorino, a hard cheese that is very much similar to Parmigiano-Reggiano is a cheese that I like very much because of its strong flavours; salty, buttery and nutty. Traditionally paired with honey, David Chang did a little twist by serving it with honey licorice which I thought could have turned out to taste medicinal. I was wrong and it turned out to work really well instead. I also liked the crunch from the bee pollen served on top. 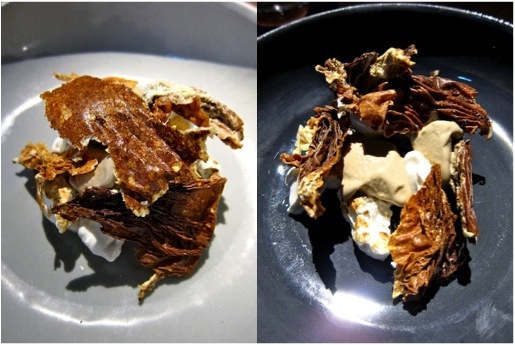 I liked the look of this dish when it arrived at the table. Resembling somewhat like fallen tree barks of some sort just made the whole dish look and feel kind of earthy. The first of the desserts made use of a native Australian ingredient, the wattle seed which brought some nuttiness to the dish. The crispy milk was rather interesting although my favourite part of this dessert was the malt ice cream because its flavours were so rich. Again, this dish had a contrast of textures with the use of the French and Italian meringues; hard vs soft. 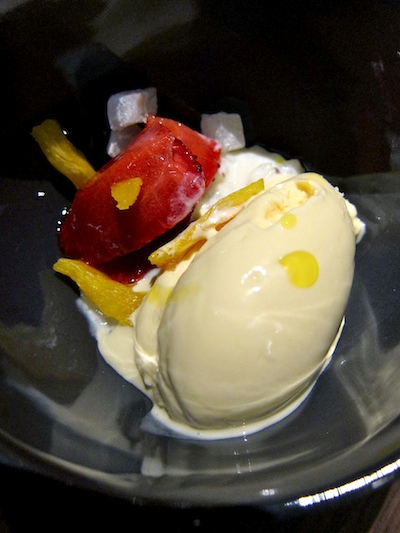 Again another winner, I loved the marriage of salt and sugar in this dessert. The miso ice cream was delicious and I liked that the miso flavour was pronounced. The pickled strawberries and pineapples added a nice sweetness and some tartness to the dish. I also liked the accompanying rice pudding that matched well with the ice cream. It was also a nice touch to throw in some rice cakes just so that the dish had a bit more bite and texture.

One would think that the meal was now over after 14 excellent courses and just as the disappointment was about to sink in, we saw Chang and his chefs start to slice off some pieces from a perfectly glazed pork butt which came out of the oven. Usually, petit fours would consist of some chocolate truffles and fruit jellies but not at Seiōbo.

We could hardly contain the excitement when the dish arrived at our table. We used our hands to tear through the slivers of pork and licked our fingers (and plate for YM) clean. Then by the end of it, we only wanted more.

The whole team at Momofuku Seiōbo certainly fed us well. In addition, service was swift, friendly and impeccable which is something that is always hard to achieve on a restaurant's first official day of operations. The dinner was without doubt intriguing, mesmerising, eye opening and simply mind-blowingly good. David Chang's food offers fresh ideas and a different point of view which certainly sets Momofuku Seiōbo apart from many other establishments in Sydney. Whatever it is, Sydney now has another strong player in the food scene which I believe will be here to stay for a while. Would I do a return visit? In a heartbeat and I highly recommend that you visit too. In fact, just before I was finishing this post off, I spotted R looking at the restaurant's reservation page. Looks like I might even be returning sooner than I thought.

P/S: Just wanted to add that I was pretty annoyed at the number of people whining over the FAQs, Momofuku's reservation systems etc. just days before it opened. Many found it easy to spend time venting their frustrations online but found it difficult to take a little time out to sign up for an account to make a reservation. For food that's this good, I find it hard to believe that anyone who loves food or wants to try David Chang's food would find the trouble not worth going through. In fact, I don't understand what "trouble' was there in the first place. Unnecessary drama really.

posted by sooks at 8:30 AM
Email ThisBlogThis!Share to TwitterShare to FacebookShare to Pinterest