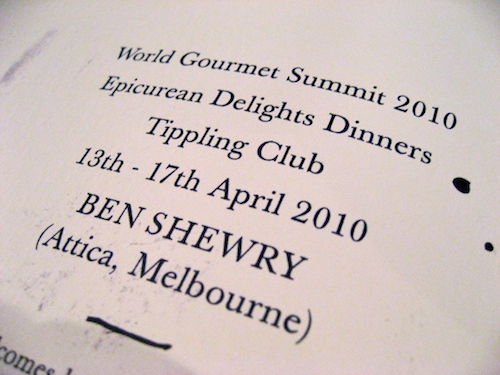 Finally, a break from London. I still have tons to write about Europe and I'll get there. Eventually.

So I've always wanted to write about this dinner I had at Singapore's World Gourmet Summit last year. It was nothing short of spectacular and virtually everyone whom I've spoken to about fine dining at some point had already heard me go on and on about how excellent it was. As usual, this fell into my backlog. That's besides the point anyway since I'm here now writing about it. 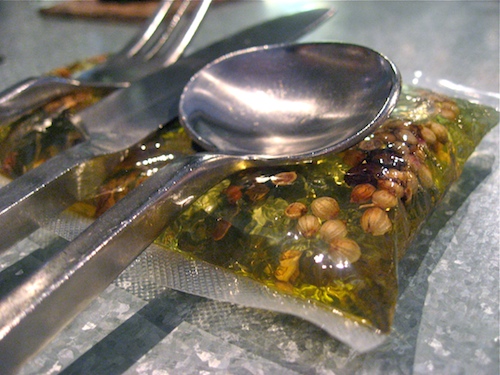 So why write about it now since all this time has past you may ask? Well I guess the excitement of having to research on which chef's dinner to attend Crave Sydney Food Festival is bringing back all the memories of the time when I was deciding on which chef's food I wanted to try during the WGS. Ben Shewry from Attica in Melbourne became the obvious choice because of his focus on foraging. Moreover, there was nothing in Singapore like it. I'll try my best(est) to recall how the dinner went but I have to say that a lot of the time, I didn't know what I was eating since the ingredients from the land, the sea and what have you were unfamiliar to me. I hope the pictures will do enough justice to how the food tasted. 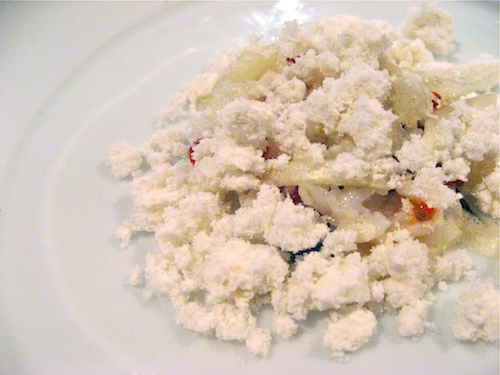 Snow Crab
One of Attica's signature dishes, this dish is seen on many blogs. Apparently, this dish was created as a tribute to New Zealand's Mount Taranaki. There was obviously snow crab and I remember flavours of horseradish and trout roe amongst many other ingredients that I could not make out. The dish was cool and textural. A good and interesting start to the meal. 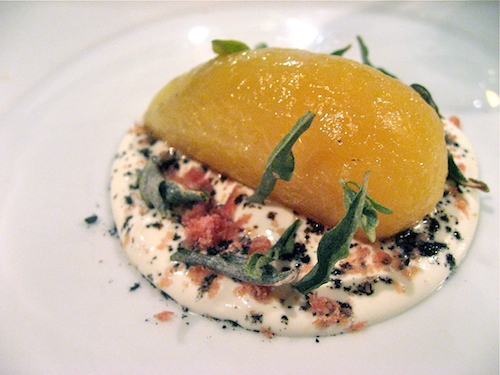 Potato Cooked in the Earth it was Grown In


This signature from Attica was the star of the night for me. The beautifully peeled potato arrived at the table with a beautiful gloss on it. As explained, the chef had to bring in the potatoes from one special farmer in Melbourne. In order to prepare this dish, they even had to bring in the soil. It was explained that the potatoes were coated with olive oil and baked in the oven with the soil for several hours. The result was a smooth and earthy potato which paired well with the goat's cheese. I have to mention that the wine pairing of Eric Bordelet's Pear Cider with this dish was excellent. 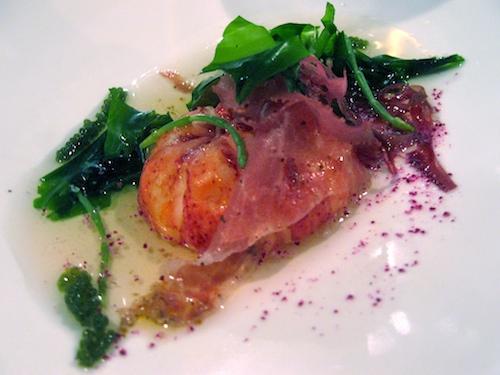 
It was interesting to have the wild seaweed incorporated into this dish. The cured ham wasn't too salty and did not overpower the sweetness of the lobster tail. A rather successful dish. 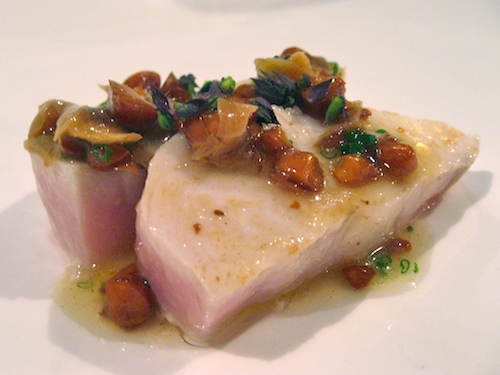 
I really liked this dish as well. The fish was cooked perfectly and I loved the textural elements of the nuts in the dish. It was a tasty, pretty and elegant dish. 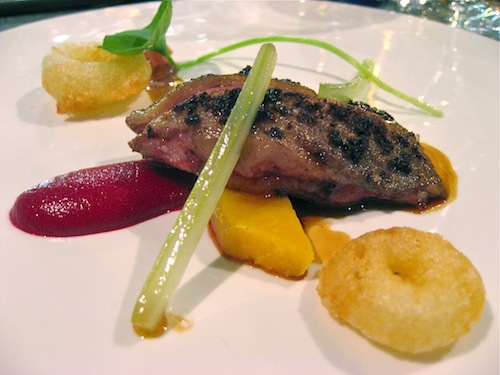 
I remember C telling me that she didn't really fancy this dish cos she isn't a big fan of game meat in the first place. I don't have problems with game so I thought this was a really good dish as well. The squab was pink and tender and paired well with the beetroot puree. I could have easily eaten a bowl of those onion rings! 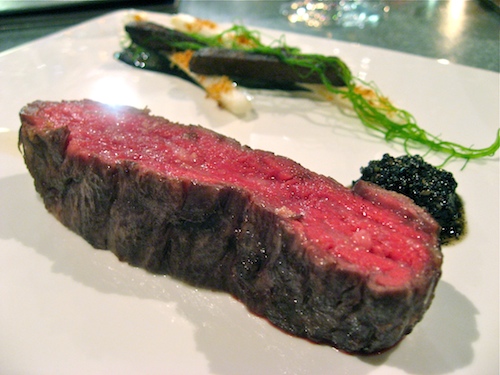 
Another excellent dish although less interesting than some of the other dishes on the menu. The wagyu beef was as delicious as it looks. The meat was cooked sous vide and had a good balance of fat in it. Moist and tender, it also had the right amount of seasoning. The white cabbage stem introduced the crunchy element to the dish and the potato soaked in soy and miso was extremely tasty and moreish! 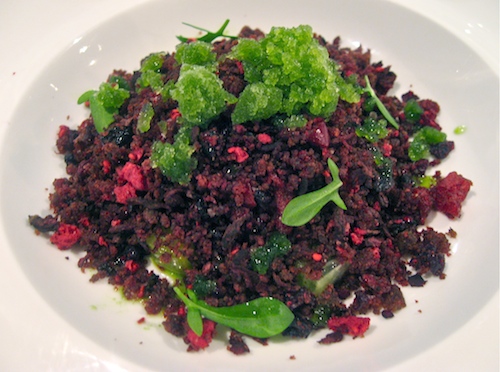 
This is another signature at Attica and was a great hit with the group. There's a bunch of ingredients in there and I may not be able to name all of them. I do know that there are frozen and dried raspberries, crumbled dehydrated beetroot and a yoghurt sorbet. I loved the mix of sweet and sour flavours and thought this was an excellent palate cleanser for the rich piece of meat which was just served prior. That was my first time having a dessert that tasted like that and until today, I have yet to have any dessert which has that nice balance of sweet and sour. 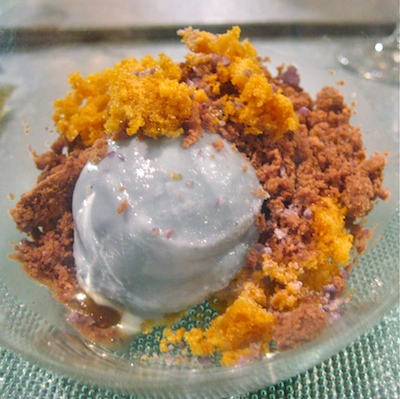 
The Violet Crumble is Ben Shewry's take on the classic Australian treat, you guessed right, Nestle's Violet Crumble. The ice cream was smooth and had nice subtle infusion of violets. The whole deconstructed dish came together nicely with the addition of the honeycomb and chocolate dust. A nice finish to an excellent meal.

A visit to Attica is definitely in the cards when I next visit Melbourne. This is a place you'd want to make a note to visit too if you're in town.


In the midst of writing this entry, Attica was crowned as Restaurant of the Year in Victoria by The Age Good Food Guide and was awarded with 3 chef hats, one of only four restaurants that have 3 chef hats in Victoria. Congrats to Ben Shewry and the team at Attica!
posted by sooks at 3:23 PM
Email ThisBlogThis!Share to TwitterShare to FacebookShare to Pinterest