I wish I took a picture of Le Cinq's dining room because words cannot describe how beautiful it is (we had to be considerate cos there were other guests in the room). Have a look at their website and you'll know what I mean. Set in classic Parisian style, it is honestly one of the prettiest dining rooms I've ever been in. It almost feels like I've been transported to a different time, just sitting in the grandness of it.

The moment we settled into our table, our table was delivered with a "little" snack - Deep Fried Calamari! I say it's "little" only because we had more than our fair share. We just couldn't resist another basket when the wait staff came over and asked us, "MORE?" We could only nod and then had to stop ourselves from ruining the meal that was about to follow. 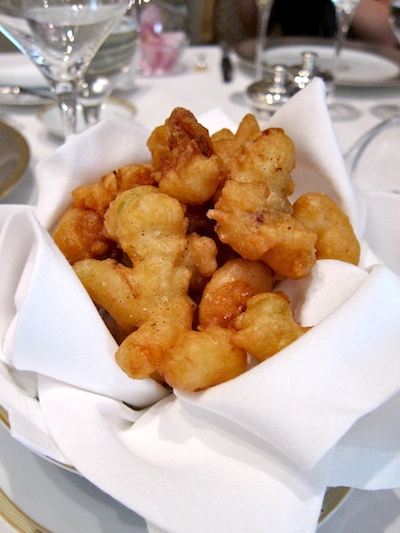 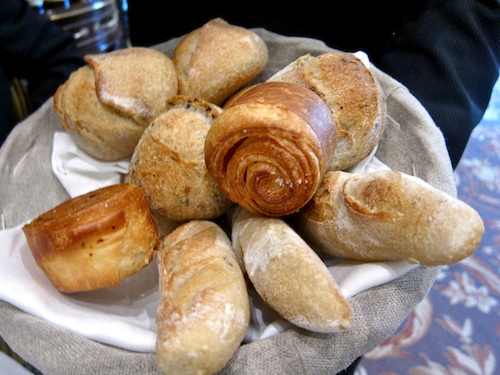 An assortment of bread (loved the Tomato Brioche) appeared alongside with possibly the best butter I've ever had (I first had the Fleur de Sel version at their home store in St Malo). Bordier's Seaweed Butter was excellent. I can't pin down what makes his butter different but all I can say is after you've tasted this, butter won't ever be the same again. 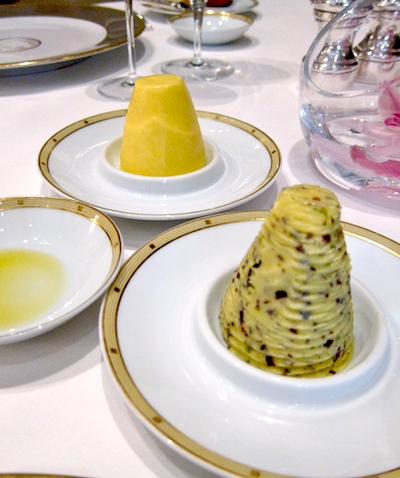 We started with a trio of amuses - from far left, Lemongrass Shrimp, Carrot Gelee with Ginger and Hibiscus and a Deep Fried Shrimp Head. Excellent start I'd say. Whilst the food did not blow our socks off, it was solid and classically French. Among the entrees, I really liked the rich and tasty piece of Foie Gras which R ordered. Afterall, what's there not to like about anything that sends your cholesterol through the roof. The Seared Tuna came a close second. 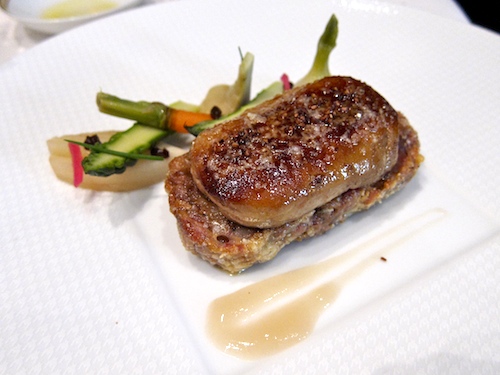 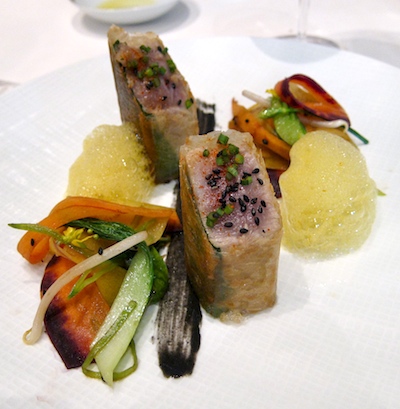 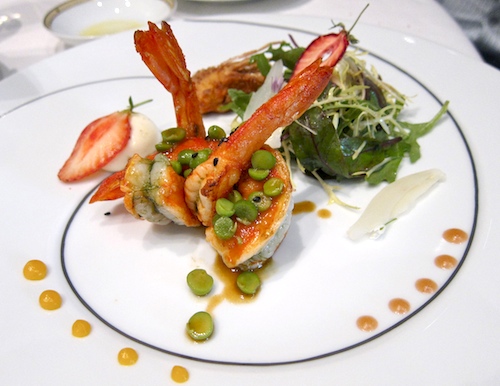 The portions for the mains were very generous. Both were pretty delicious but by this time, I was already stuffed (blame it on the Fried Calamari and awesome breads). Both dishes, the Red Mullet and the Calf's Liver were cooked extremely well. The liver was especially tender and didn't have that strong offal taste that I was expecting. Can I say that the carrots that accompanied the Calf's Liver were extremely buttery and delicious?! 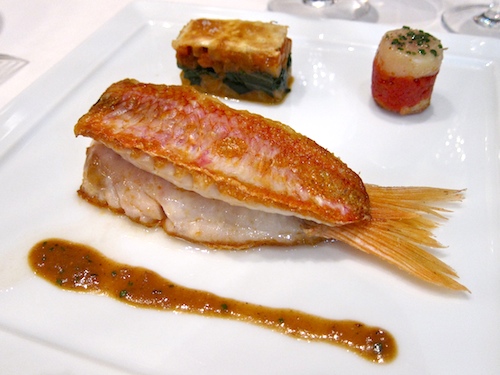 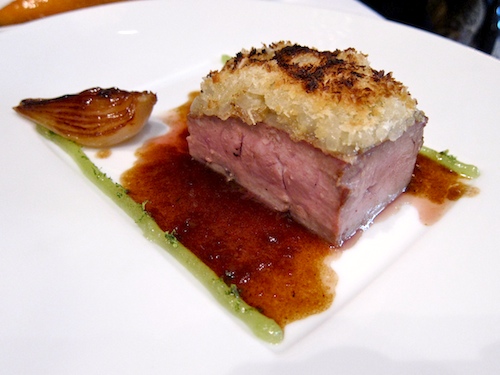 Before dessert arrived, we did a little detour to the cheese trolley. The Gorgonzola (pictured below in the biggest tray) was creamy and delicious. Salty but oh-so-good. There was also another soft cheese which paired so well with the honey that they drizzled on top. I just love the whole spectacle of having a trolley full of food placed in front of me for my selection! I didn't think the desserts were particularly memorable. I recall the pre-dessert to be pretty enjoyable though. I did like my dessert which had the combination of salted caramel, chocolate and lemon but the Profiteroles doused with a whole of chocolate failed to impress much although it did taste good - as expected. 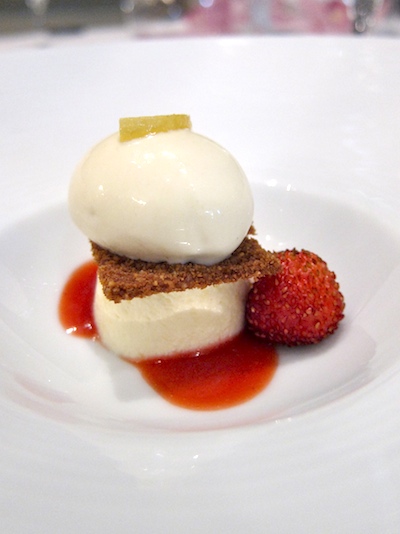 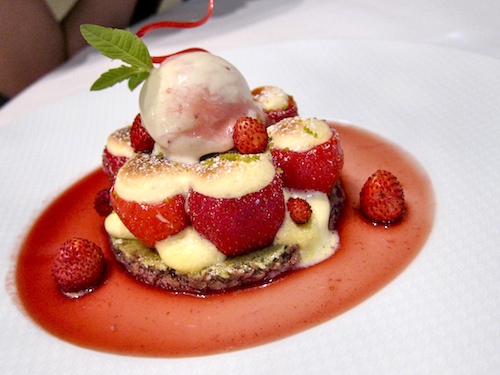 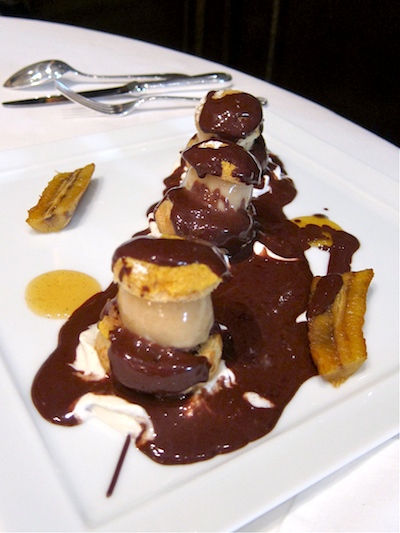 We finally rounded up our 3 course lunch with selection of the Bonbon trolley (yet another!). I thought I was too full but somehow or rather, I still found space somewhere in my tummy to stuff some truffles, peanut brittles, marshmallows and macarons in. You could say they were too good to be passed up. 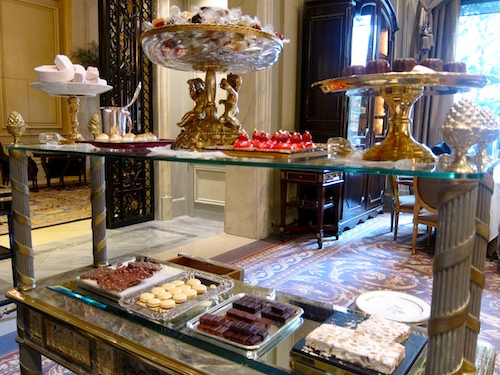 It is not only the grandeur of the dining room that I will remember. The experience was unforgettable. Le Cinq may only be a 2 Michelin Star restaurant but it is certainly deserving of a third one. The food may not have been the most exciting but the service was impeccable; the staff were extremely friendly and at times engaged in humorous banter with us. I had half expected the service to be a stuffy because of the whole set up of the restaurant but I was flatly proven wrong. And if you are looking for that Michelin Star experience when in Paris, this is one place you don't want to miss.
posted by sooks at 3:35 PM
Email ThisBlogThis!Share to TwitterShare to FacebookShare to Pinterest