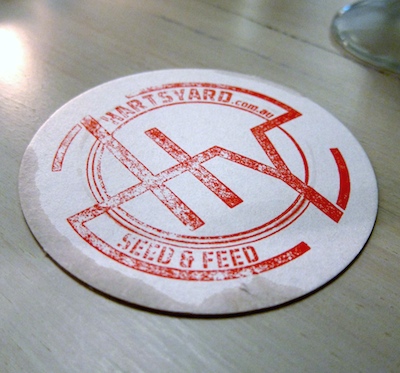 Twitter is a very essential form of social media these days. I don't think anyone who runs a restaurant or has a Twitter account would disagree with that. Unlike Facebook which I use to keep in touch with friends that do not live in the same country as I do, I use Twitter primarily as a news source where I can get the latest information on anything that I'm interested in. And needless to say, I follow many accomplished food writers, chefs and other bloggers so that I can get first hand information to what people are eating, who's got a new menu about to launch, an upcoming pop-up dinner and of course, the newest and hottest new restaurants. And that's how I came to know about Hartsyard. It was just simply too difficult for me to ignore the draw of fried chicken after seeing Pat Nourse's tweet.

But of course, there were other things that spoke to me on the menu so I swiftly called up Hartsyard and scored a reservation just after a few days it opened. We were received with great hospitality by the staff and especially by Naomi, co-owner and wife of Chef Gregory Llewellyn. You can read more about both of them here. Whilst waiting for the food to arrive, I saw Naomi and her team explaining dishes and engaging in small talk with the customers. It was really pleasant and as a customer, I loved that there was so much pride and effort put in to making sure that the service was matched with the food that they were proud to serve.

The dishes are divided into 'Seed', being the entrees and 'Feed', being the mains. The menu has an American slant and is showcased in dishes such as the Oyster Po' Boy. R's usually stays away from oysters but I think we were almost ready to order another portion of this after we were done with the first. The English Muffins made inhouse were soft and the dish was just full of texture with the crisp from the fried oysters and the fresh crunchy coleslaw. Hartsyard also makes their own hot sauce to accompany the Po' Boys and with or without it, they're equally delicious. You could have also put some of that house made hot sauce on the Crispy Pig Tails which I reckon were good too. The pickles were essential in helping to cut through the richness and gelatinous texture of the pig tails. 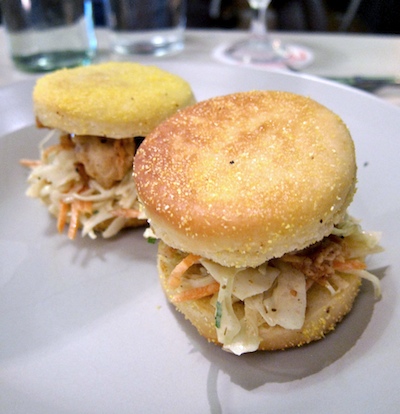 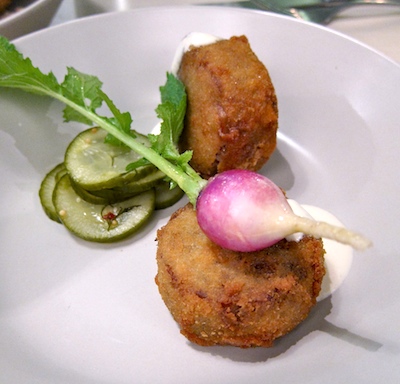 I had to order the Fried Chicken which drew me here in the first place. R has been pestering me to make biscuits and gravy at home and now that Hartsyard has this on their menu, I no longer have to do it! The Fried Chicken was whatever a darn good fried chicken should be. It was tasty, moist and had a beautiful crunch on the outside. I remember the biscuits that I had in the US to have a firmer crust but the version here was pretty soft. I thought the sausage gravy was creamy, savoury and very much to my liking. Definitely a dish I would order again. 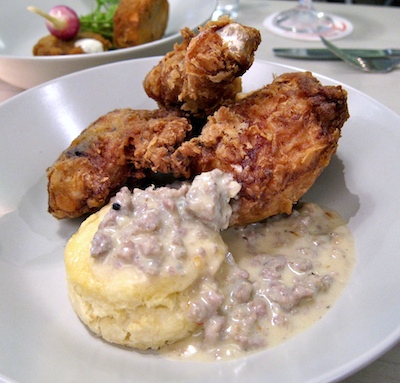 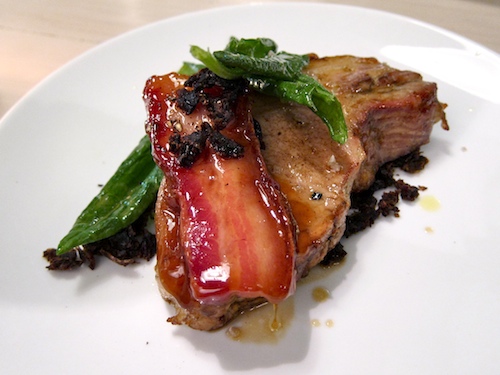 Among all the dishes we had that night, the Roasted Pork was the dish that let me down slightly. The pork was overcooked and as a result, just wasn't very tender. There were redeeming factors though. The bacon was sweet and well caramelised albeit a little sticky and I thought the vadouvan (a blend of spices that tastes almost like an Indian curry spice) worked really well with the morels and pork. If the protein was cooked better and possibly had a little sauce, I reckon that it would have been a more enjoyable dish.

Out of the 2 desserts we had, I enjoyed the Peanut Butter and Banana Sundae a whole lot more. It was simple, sweet and utterly indulgent. I loved the doughnuts and wished there was more of it. It's pretty much a dessert I don't have much of these days. Desserts in restaurants try to do the fancy things these days and forget sometimes that things can be great when they are simple. It was the case with the Key Lime Pie. As we were served the sundae first, I was expecting a very simple pie but what arrived was a deconstructed tart. The flavours were all there and they weren't bad but I wished it was just a simple pie. 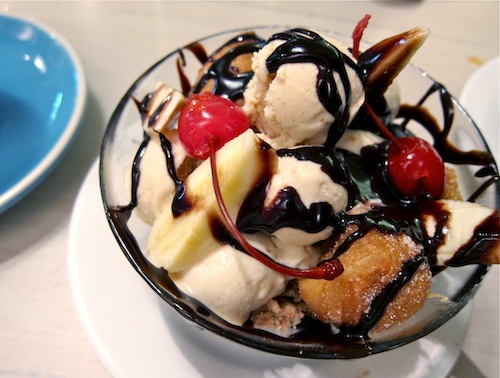 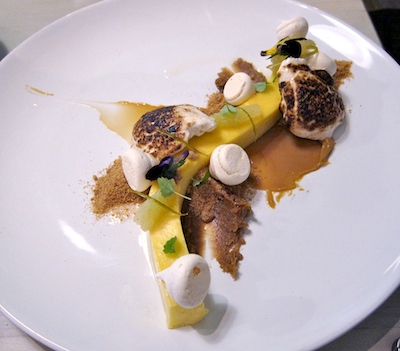 Thing's weren't all perfect that night but when given more time to settle in, I'm sure the things that weren't spot on will be much better. In any case, with a winning formula of food that is most acceptable for today's diners, decent cooking and great service, it's hard not to capture a group of faithful customers who will spread the word and keep coming back for more. And then of course, there's always Twitter.
posted by sooks at 1:06 AM
Email ThisBlogThis!Share to TwitterShare to FacebookShare to Pinterest