I get why some restaurants do extremely well in this city. And I get why the Merivale Group is thriving - new concept restaurants opening one after another when many in this city are doing the opposite. And it's meals like these that while simple, helps to keep things interesting. Having seen success with the previous events, The Hangover was back for a 3rd installment. I thought the whole concept of serving food that's great after a hangover was a cheeky and really fun idea. 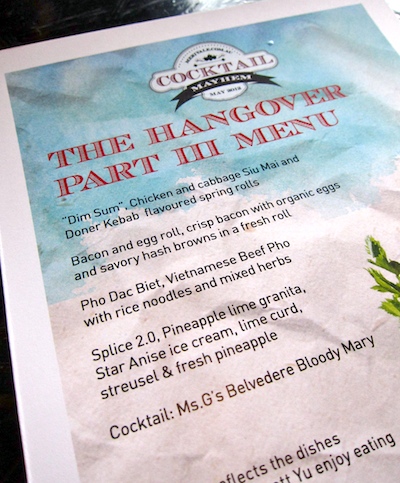 We started with the creating of our own Bloody Mary at the bar. Shots of vodka were poured into tall glasses lined with celery salt by the bartenders and the rest was left up to us. A buffet spread of limes, lemons, tabasco sauce, worcestershire sauce, chilli, beef stock (!), tomatoes, wasabi, fresh celery, cucumbers, tomato juice etc. were all laid out to be part of our concoction. I wasn't so adventurous (thank god!) cos R who decided to go out on a limb with the beef stock ending up with a pretty savoury drink which wasn't too appetising. 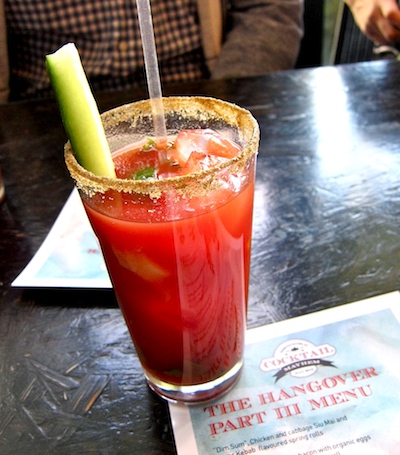 my own version of a Bloody Mary

The first plate that arrived wasn't a pretty one. Didn't matter anyway because I was supposed to be hungover and delicious fried food are meant to help cure that. I thought both items were tasty and the taste of kebab in a mini spring roll was quite a novel idea. 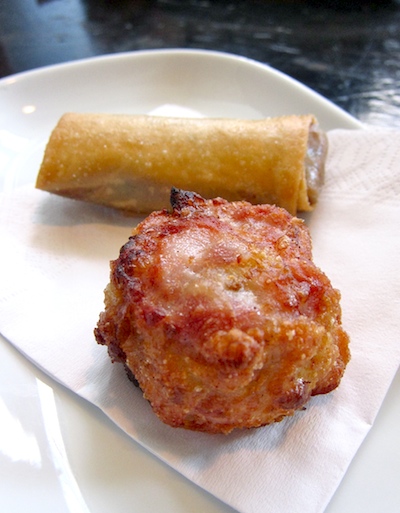 The second dish that arrived came wrapped in a brown paper bag and oil was slowly seeping through it - another good sign of a hangover cure. It was like Christmas came early because all of us at the table tore open the bag carefully to reveal a delicious looking crispy fried hash brown, salty bacon, cheese and an oozy egg sandwiched between 2 soft buns, staring right back at us. We savoured every moment and every bite because it was just utterly delicious. At the end after smacking our lips, everyone said in unison, "TOO SMALL!". I actually wouldn't mind getting hungover every night (ok, maybe every week) if I got to eat this everytime that happened. 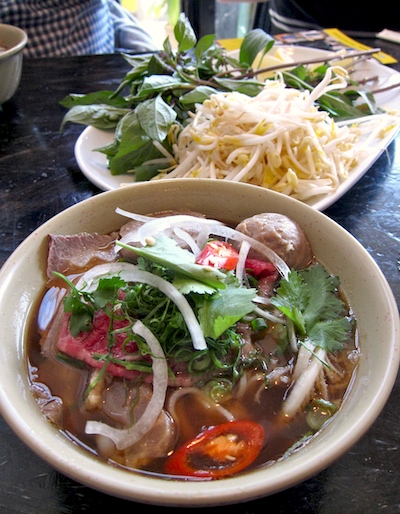 It's easy to see who probably came up with the idea for this dish. Chef Dan Hong who comes from a Vietnamese background probably thought a bowl of pho with some hot soup was perfect as a hangover cure. I'd say he was right. The broth was really hearty and it was really nice to get the mix of raw and cooked beef, beef balls, tripes and tendon. That's how I usually order mine at a Vietnamese restaurant anyway. I would have preferred thinner and smoother rice noodles to be used but I finished every bit anyway. 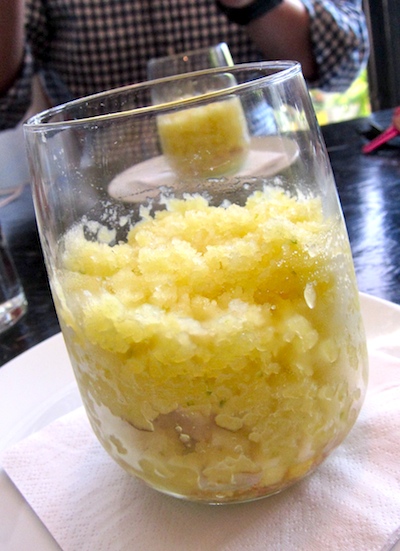 I think my companions at the meal expected not to like this dessert much because it was just an ice dessert but they ended up liking it a lot more than they had anticipated. I liked it a whole lot too. It was pretty fun just digging into the dessert with a spoon and have different flavours picked up in each bite. I enjoyed the streusel which gave the dessert some texture and I think the lime curd was really tart and delicious. The combination of pineapple and lime worked well and overall, it was a real palate cleanser that probably helped to take away the greasiness from the previous courses.

All in all, it was great fun! I'm not sure if there will be another similar event again but keep your eyes peeled because you don't want to miss out the next time! 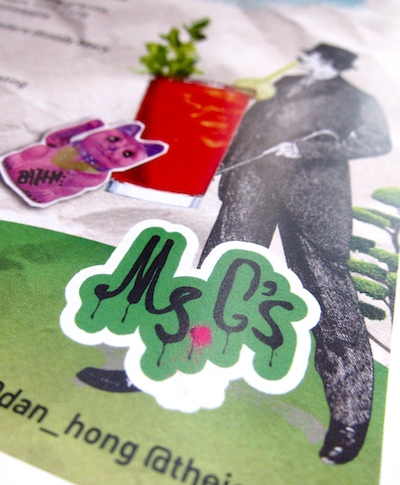 posted by sooks at 1:36 AM
Email ThisBlogThis!Share to TwitterShare to FacebookShare to Pinterest