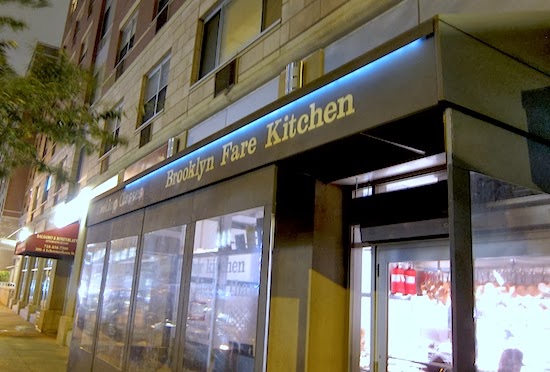 I wish I had the photos to show because this was one exceptional meal. It was difficult getting a table so you could imagine how happy I was (jumping for joy, literally) when I finally managed to get through to someone some 100 over phone calls later. In fact, I lost count because my trusty iPhone could only record up to 100 on the call list. It was quite a scene as we had 3 phones dialling in at the same time but anyhow, we got there and scored ourselves a 10pm reservation. I know what you're thinking - an 18 to 20 course degustation at 10pm? What time would we finish? But we went prepared and got through the whole meal in slightly over 2 hours which I would say was possibly one of the best 2 hours well spent at a dining table. In fact, it was the most outstanding and memorable dining experience I had all trip.

Located a few steps from Brooklyn Fare (the grocery store), Chef's Table is one of the few 3 Michelin Star restaurants in New York. In fact, it is the only one in Brooklyn that holds that highest honour given by Michelin. The restaurant does 1 to 2 main seatings a night depending on which day of the week it is and each seating only allows for a maximum of 18 diners. The seating for the 18 diners is staggered into 2 timings so that the kitchen has time to prepare and serve the dishes all at once to each group, alternating between them. Guests perched on a high chair at an enclosed U-shaped counter top get to see all the fuss that goes on throughout the night. A server that has no way of exit during service, stands right in the middle of the counter and is the only person who explains all dishes that are served.

Under the watch of Chef César Ramirez, Chef's Table's menu is mainly a combination of raw and carefully cooked seafood dishes. I say 'careful' because they are treated with the utmost respect; introducing flavours that complement the seafood and, not overshine it.

The dinner started with a palate cleanser of a cucumber sorbet and then moved into one bite canapes of an oyster, raw fish and the most well known, Hokkaido uni with black truffle and brioche. It was almost too painful to see all of that uni gone at one go but I sure took my time to savour the sweetness of it all. There were only 10 of us that night and we polished off a whole box of uni just for that dish. The hot dishes proceeded right after with Oscietre Caviar being the first, followed by a series of fishes such as black cod and kinmedai (golden fish). We then ended the savoury courses with some superbly marbled wagyu beef that was served with the tiniest potatoes which had been specially grown in Idaho for Chef's Table. I'd admit that while I don't remember how every dish was prepared and the names of all the seafood I ate that night, I recall being blown away at most of the dishes. Each mouthful was just a delight, everything on the plate seasoned perfectly.

Service was pretty attentive and friendly too. It was pouring the night we were there and I remember Chef Ramirez opening the door for us and welcoming us into the restaurant. It's not always that you get the meet the "brain" of the restaurant and while we certainly did not expect to talk to him, it certainly was a bonus to speak with Chef Ramirez for a bit. Just from that short conversation, we could tell he was passionate about his craft. When he realised we were from out of town, he even made the effort to ask where else were we planning to dine at around the country.

I guess without photos, it's really hard for me to explain how much of an impression this meal made on me. The food is different (except for that amazing uni dish) but if anything, this video below should help to explain it all. Enjoy!

posted by sooks at 1:06 AM
Email ThisBlogThis!Share to TwitterShare to FacebookShare to Pinterest