a Hakka banquet at Claude's.

Hi, I'm Sooks and I'm a Hakka.
I've been familiar with quite a lot of Hakka food since young because of my parents and more so in recent times due to the opening of the family's restaurant. Just a little bit of background. Back in the old days, Hakkas were known as nomads and generally lived in the inner land of China thus, seafood in the Hakka cuisine is a rarity. There was also a need to preserve their produce in order to ensure they lasted longer. Hence, the Hakka cuisine is characteristically known to be salty and boasts strong and heavy flavours.
Chef Chui Lee Luk (or 'Chui' as affectionately known by her regular customers) of Claude's comes from the same heritage and presented a Hakka banquet for the Sydney International Food Festival this year. Having grown up with Hakka food on the table, she wanted to present her own modern take on the cuisine and showcase it to many who were probably unaware of Hakka food in general due to the lack of Hakka restaurants in Sydney. 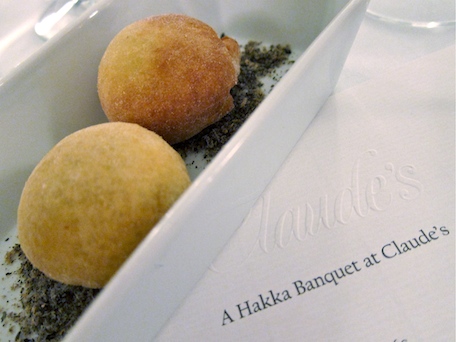 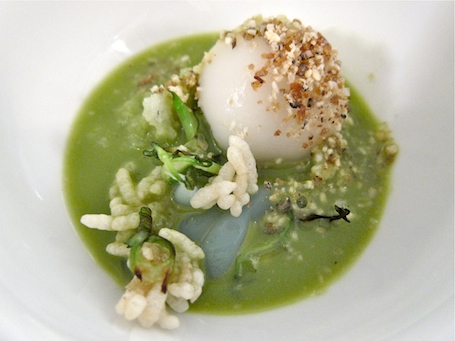 Lui Cha Fan; Thunder Tea Rice
This dish is close to my heart as it is something I grew up eating. It reminds me a lot of the years when I was still living in Malaysia and my mum used to buy this home for lunch ever so often back in the days. I was really surprised that Chef Luk never tasted this dish before creating it for this dinner because she was quite spot on with this dish. Although she probably didn't use as many herbs as compared to how it's usually made, the broth was full-bodied and extremely flavourful. I loved how she played with different textures of rice such as the crispy rice, the mung bean noodles and the glutinous rice ball which was filled with dried shrimp and turnip. Delicious. 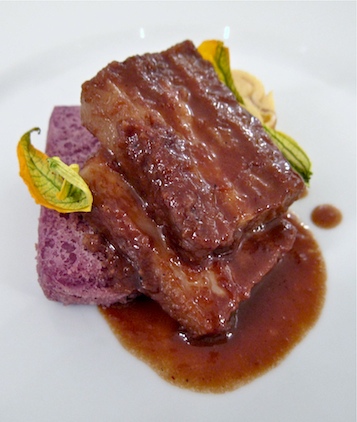 Kiew Nyuk; Triple-cooked Pork Belly with Five Spice
& Fermented Bean Curd with Taro
This was my favourite dish of the dinner. Traditionally, the pork belly is marinated with fermented bean curd and steamed together with the taro. Chef Luk's version dealt with the pork belly and taro separately. The pork belly was confited, deep fried and steamed and was completed with a dressing that consisted of five spice powder, onion, garlic and fermented bean curd. The crispiness from the deep fried yam contrasted well against the tender pork belly. I loved that this dish packed a punch full of flavours and yet, was not too heavy. 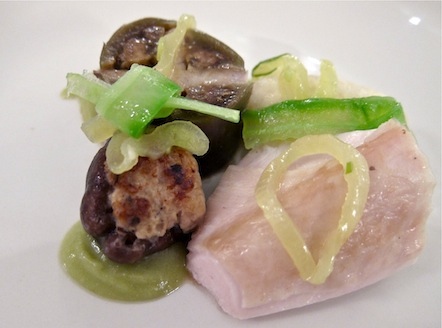 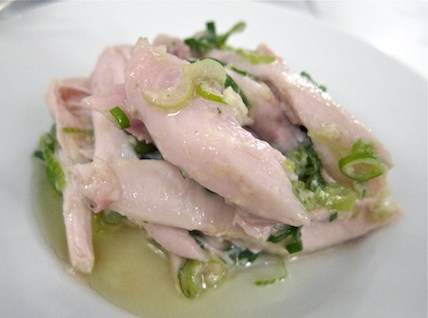 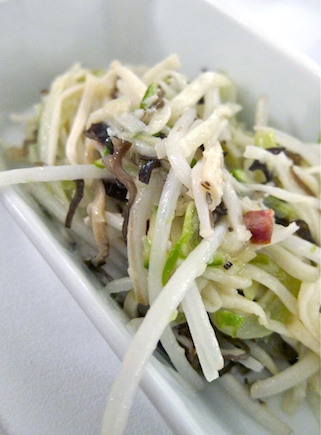 Egg Noodles with White Needles & Abalone
To be honest, I was a little thrown off by this course as I felt there were too many components to the dish. My favourite thing in this course were the noodles. Unfortunately, I wasn't able to taste much of the abalone but I think it would have done well without it anyway. I probably could have been contented to have a huge plate of that noodles as a full course on its own. Chef Luk was probably trying to do a modern take on the classic Hakka dish, Yong Tau Foo from the pork stuffing for the shiitake mushroom and the fish and spanner crab paste in the eggplant. I personally felt that it fell a little short in terms of flavour as compared to the previous course which I had enjoyed so much. 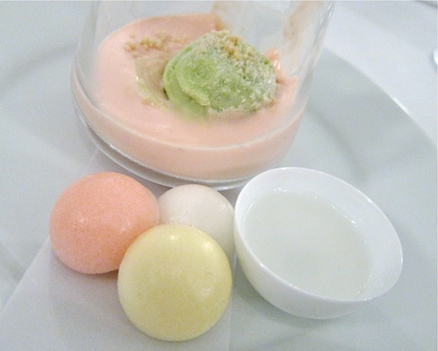 Fatt Koh; Fermented Rice Cakes with Pandan Dipping Sauce,
Strawberry Pannacotta, Avocado Ice Cream
The last course of dessert was also a bit of a hit and miss for me although there were some pretty good components. The colours on the plate were pleasing and I thoroughly enjoyed the pannacotta and the avocado ice cream. On the other hand, the rice cakes which were flavoured with strawberry, liquorice and angelica were a little on the dry side. Chef Luk explained that she had added the syrup cooked with pandan leaves so as to make it sweeter and more suitable for the western palate. I'm unfamiliar with Hakka desserts and the only one that I know of is mochi, a glutinous rice paste that is coated with powdered peanuts. In fact, the Hakkas are hardly known for sweets.
My sis and I decided to attend the dinner because we were extremely excited to see and experience how traditional food which we both grew up with could transform in the hands of a chef who was trained in French cooking, a chef who owns one of the finest establishments in Sydney. The dinner really opened to my eyes as to how different food cultures can intersect to create good tasting dishes.
Whilst admittedly there were a couple of misses for me, the passion, thought and heart that was put into the Hakka banquet was commendable. I am happy that Chef Luk chose to present dishes which meant something to her; the dishes were close to her heart and were very much a part of her growing years. More importantly, I feel proud knowing that a couple more people now have some understanding of the Hakka's history and its cuisine. 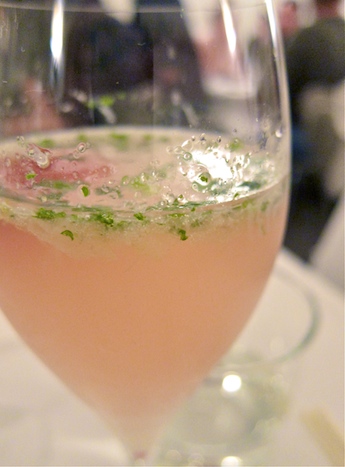 
If you'd like to read more about Chef Luk's inspiration and details behind the creation of each dish, please see here.

posted by sooks at 4:47 AM
Email ThisBlogThis!Share to TwitterShare to FacebookShare to Pinterest