So I finally made good on my promise to return for a regular meal on a regular night after the interesting Just Desserts event I attended during Crave Sydney last year. For me, Tomislav always seems to slide slightly under the radar because many other chefs who seem to have the same calibre as Chef Tomislav Martinovic spend quite a bit of time under the media spotlight these days. So to be honest, it wasn't my idea to pay a revisit. R was the one who did the googling one day and thought that I would like the current menu at Tomislav — a table was immediately booked. 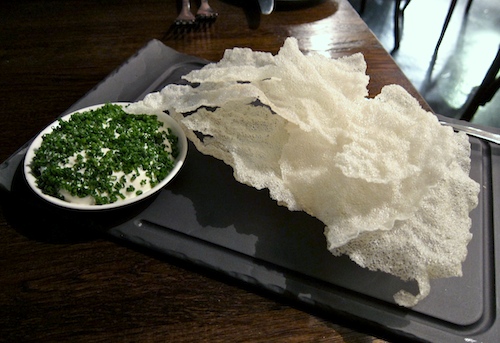 We started with a snack of Rice Crackers. I've had the sea salt and vinegar version that comes in a little spritz bottle previously and enjoyed it very much but I was keen to try the crackers with their house made sour cream. It didn't have the same sourness as the vinegar version but the sour cream with the chives was very light and just the perfect accompaniment for the wafer thin crackers. In fact, I liked it so much that I slathered the rest of the sour cream which we didn't finish onto my slice of sourdough! It was actually competing for attention with the butter that was laced with a subtle amount of coffee which I thought was an interesting idea and a first for me.

We opted to go with the 4 course meal. I thought both the starters that R and I ordered were real cracker dishes and helped set the tone for the rest of the meal. And I must say, the bar was set real high. I remember telling R once after watching it on a TV show that I wanted to try venison tartare one day but lamented that it was difficult to find since most just do it with beef. Tomislav helped made that wish come true. Served with some mint crumbs, a quail's egg yolk, hazelnut oil and wafer thin biscuits, the venison tartare was a pleasure to eat. The dish was seasoned well and all the components worked harmoniously together. 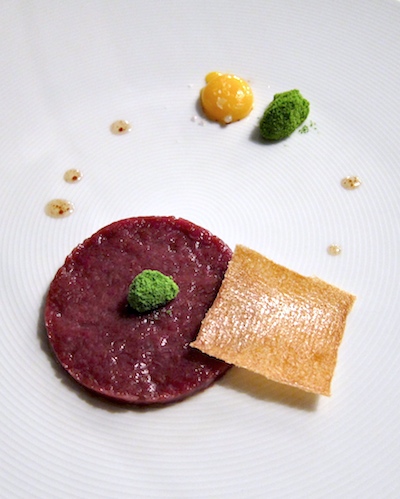 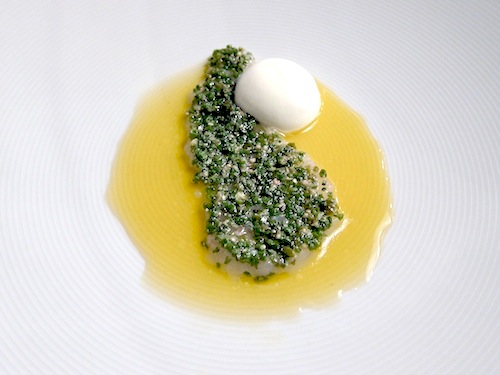 This dish was another joy to eat. Using the chives and sour cream combination here again, it was paired with a portion of sweet scampi, some white sesame (with the chives) and pumpkin juice which had been clarified. The sour cream on its own didn't have a ton of flavour but lent some creaminess to the dish and helped balance the sweetness from the raw scampi and the pumpkin juice. I thought the combination of flavours was rather innovative. 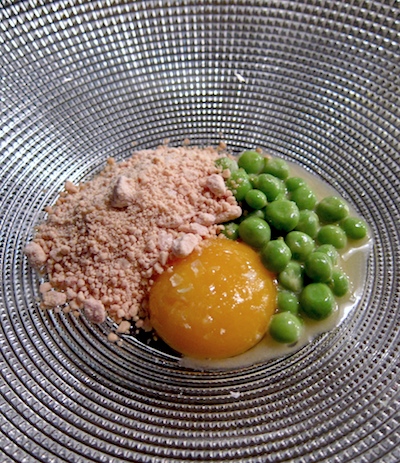 I was deciding between this dish and the grilled beef tongue. In the end, I opted for this dish after a detailed explanation from the wait staff on how this dish was going to be served. Plus it was hard to forgo a dish with egg and foie gras. When the dish arrived, I wasn't exactly blown away by how it looked but as they say, never judge a book by its cover. Every mouthful was a delight and I was actually blown away by the flavours that worked together on this dish. The new season peas had a slight crunch and helped give the dish texture. I was expecting the foie gras to have a biscuit-like texture but I was surprised that it turned creamy the moment it hit my mouth. Buried underneath the foie crumbs were cranberries which lent sweetness and some tartness to the dish. Then of course, the creamy and oozy yolk helped bind all the elements together. It was a balanced and really enjoyable dish.

The roast quail was yet another delicious dish. In fact, this was R's favourite dish of the night (I still haven't decided on mine yet). Cherries with quail is quite a classic combination but here, the sour cherries were served in the form of ice. What I liked about this dish was that the quail was cooked to a perfect medium rare and that the meat was so tasty. 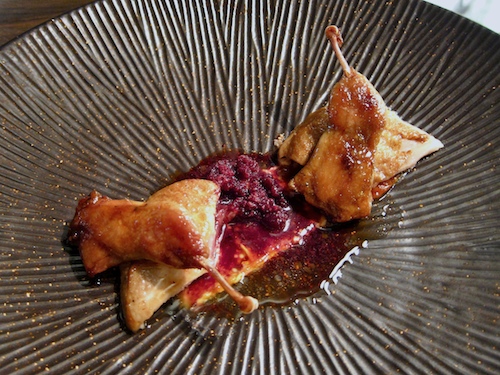 The mains continued to impress. The short rib was wonderfully tender, fatty and well cooked. The polenta was really soft and light and there was a nice acidity in the dish that helped to cut through the richness of the dish. It was a pretty classic dish but what stood out was the execution and its flavour. 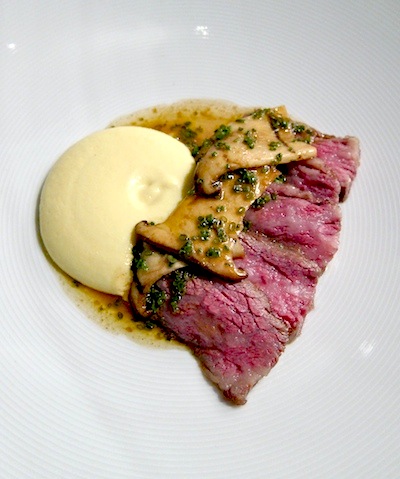 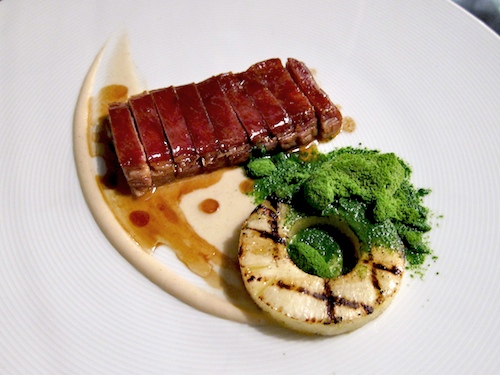 Whilst I loved the familiar flavours of the beef, I did like the ingenuity behind the Roast Lamb Belly. It's usually a cut of the lamb that you don't get to see much at other restaurants and it's a shame really because this is a very tasty part of the animal. The fat was rendered well here and the skin was crispy. The wasabi in the form of a powder didn't have an overpowering flavour and worked well with the slight tartness of the pineapple to help cut through the oil. The sweetness of the cauliflower puree helped balance the overall flavours on the plate.

Tomislav was once voted to have one of Sydney's best chips (read more about it here) and I knew that I had to order it when it was offered as a side. Using a triple cooking technique which Chef Tomislav picked up during his stint at The Fat Duck, it was everything that it promised to be — crunchy and extremely crispy on the outside and fluffy on the inside. Addictive. 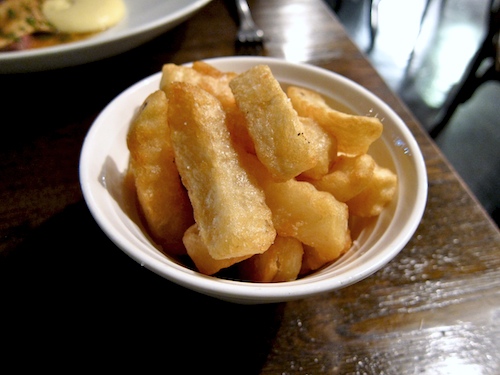 I personally thought that the savoury dishes far outweighed the desserts. In comparison, it just didn't seem to have much impact in terms of flavour.

The Milk Chocolate Cream Cake was served with the same mint crumbs which was used in the Venison Tartare so it felt like the meal went one full circle. The smoked banana ice cream definitely delivered the smokiness that was promised and was on the verge of being too overpowering. And because it was a cream cake, it didn't deliver a strong chocolate flavour that we had hoped for. It wasn't a bad dish but it just didn't blow our socks off. 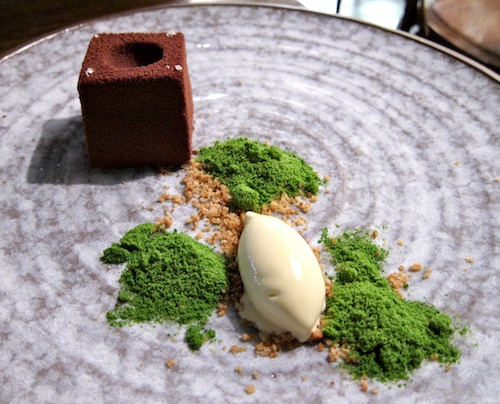 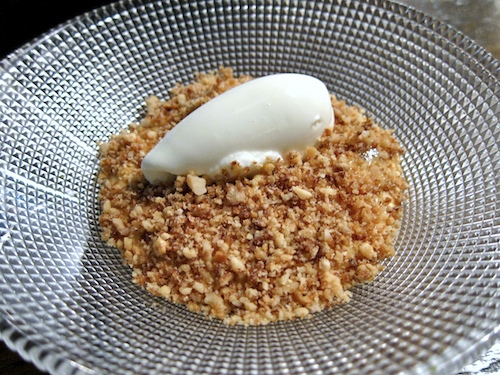 Out of the 2 desserts we had, I preferred the Caramel Pudding. It wasn't overly sweet and the sourness of the yoghurt sorbet helped to balance the dish (provided it was eaten together with the pudding). The walnuts added the texture and there were surprises of little gooey caramel pieces within the pudding.

All in all, I thoroughly enjoyed the dinner at Tomislav and some of the dishes we had will definitely stay in my mind for a while. It seems a bit unfortunate that it's taken me a while to try the food here but hey, better late than never right?! The current menu was just updated recently and more changes are expected to come in the next 2 months which I think is exciting news. However, I think this menu is not one that you want to miss out on so why wait...  pick up the phone and get a table soon, if not today!
posted by sooks at 10:47 PM
Email ThisBlogThis!Share to TwitterShare to FacebookShare to Pinterest